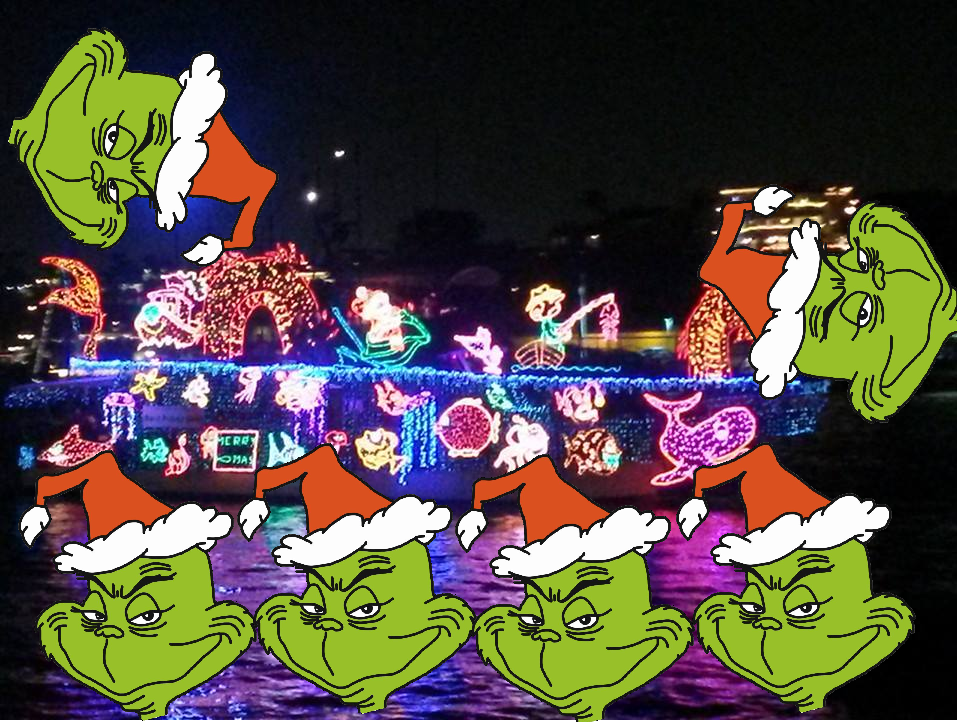 The Grinch that Stole the Newport Beach Christmas Boat Parade

While we hate to give such news during Christmas, after careful consideration, we think it is important for children young and old to know where the Grinches are this Christmas– and every day of the year.

As we wrote that the Chamber has no authority to cancel the Newport Beach Boat Parade, back on November 19th, our article got tons of traction, even being printed in national news outlets, TV, and radio. This press doubtlessly made the Chamber very nervous. After all, if someone else organized the parade effectively, how could they possibly convince the city council to doll out your taxpayer dollars to the Chamber to promote the parade, which they are provably not needed for?

Well, they made that bed– and as new organizers began organizing, we at SaveNewport began receiving emails from throughout the harbor promising to put on the boat parade for the full amount of days that the Chamber usually promotes.  A very merry Christmas, indeed!

One week after our first article, we got an invitation to be included in the loop for the organization calling themselves the “Newport Harbor Christmas Parade“– but who were these masked men?  On November 23rd, we received a text message from Kevin Martin from the Balboa Bay Club, stating that he wanted to get me on a call with two of the other organizers of the parade.  The call was between SaveNewport, Kevin Martin of the Balboa Bay Club,  Scott Svidergol of Newport Print Services, and co-organizer Ryan Marshall.

On that call, SaveNewport explained that we are not organizing the parade, but merely providing publicity for the event– which others had told us they would be putting on despite the Chamber cancelling.   The others on the call said they loved that, and supported SaveNewport’s new (and expensive!) efforts in creating public voting and prizes.  But with one catch: this new group suddenly only wanted to do the parade for three of the five days.  Why?  More on that a few paragraphs down.

The Chamber was seemingly becoming audibly nervous according to the rumor-mill, particularly Chamber president Steve Rosansky, who saw his golden-egg-laying-Grinch quickly vanishing into the cheer of Christmas.

Rosansky then sent me this threatening-sounding email, which he immediately quit responding to when we asked him to validate his claims.  We have attached the unredacted email thread, here: http://savenewport.com/wp-content/uploads/2020/12/Steve-Rosansky-Save-Newport-Boat-Parade.pdf (NOTE: read from bottom-up)

Suddenly, the tides turned with the Newport Harbor Christmas Parade group, too.  As it turns out, the organizers who I spoke with had previously organized for the Chamber of Commerce for many years.

But why were the organizers for the Chamber organizing the boat parade that the Chamber said they wouldn’t organize– but only doing it for three days instead of five days?

Their answers were pretty telling, and it certainly seemed like this was an attempt to save the parade for the Chamber, so that next year when the funding came around again, the Chamber could say “they did a good job, but only did half the days we normally do“.  See where this “Cold War for Christmas” is heading?  We have attached our unredacted email chain here, too: http://savenewport.com/wp-content/uploads/2020/12/Chamber-Organizers-Newport-Beach-Boat-Parade.pdf (NOTE: read from bottom-up.  Also note: The parade did *not* change course, and never went down the channel we inquired about in this email.)

Suddenly, the “Chamber Organizers” stepped forward to take official control of organizing a newly forming “supposedly-rogue” boat parade.  They had people call to harass our news group to demand a list of other boat parade organizers.  They issued flyers that the dates were “17th to 19th ONLY” in an attempt to confuse the harbor.  Many otherwise friendly boaters became aggressive on the harbor to other boaters, telling them that they were only allowed to do the Christmas Boat Parade on three days– not five.   Grinchy text messages, emails, and Facebook comments were flying as if it were the end of the world– because for the Chamber, it may very well be.  And they knew how to motivate their people.

Then, after SaveNewport had collected thousands of dollars in prizes from local merchants who need the business to help them through this particularly frigid political season, on the day before the parade, the Newport Harbor Christmas Parade group announced to all captains on a group call that there would be no contest, no voting, and no prizes– and that anyone telling them otherwise was lying.  The result was a meager 6 signups for the SaveNewport boat parade contest out of many hundreds of emails that we had originally received signups for.   Definitely not enough to hold a contest with four prizes.

As a personal note, this writer came personally out of pocket to the tune of about $3,000 to build out a voting application– in addition to the thousands of dollars that others donated in prizes (which are all being returned in good faith).

In the end, the Chamber Organizers successfully pulled off a shutdown of all other competing parades, in a very Grinch-like way.

But the question remains: Will the City of Newport Beach doll out your taxpayer dollars again next year to fund the Chamber?  The same Chamber that abandoned their very members in the time of their most-needed help, in the dead business season of winter, after an incredibly painful year?

We shall see, but you can always voice your own personal opinion by emailing council, at citycouncil@newportbeachca.gov.

PS: For those of you who don’t already know how the Balboa Bay Club got “their” land– ask around.  Or perhaps we will do an article on that soon, too 🙂

Mike is the founder and publisher of Save Newport and Chair of Government Relations for the Elks Lodge. He writes, shoots photos, and edits, but much of the time, he's just "the IT guy". He can be reached at: Google+, Facebook, or via email, at michael.glenn@devion.com
@Save_Newport
Previous The “Christmas Star” Shines TONGHT!
Next Merry Christmas from the Entire SaveNewport Team!