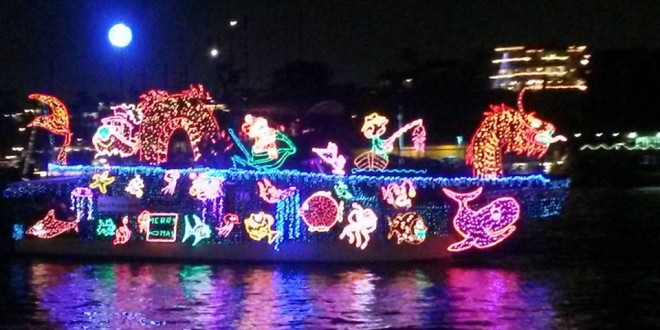 The Newport Beach Boat Parade was started by Gondoliers in the harbor, 112 years ago.  Initially called the “Tournament of Lights”, the parade was founded by John Scarpa, an Italian gondolier who enjoyed his privacy, and Joseph Beek, developer of Beacon Bay, and the famous Balboa Ferry Line.

This year, big-name harbor organizers are picking up the slack from the Chamber dumping the event.

Routes are pending, but the dates will largely remain unchanged, as we hear.  Many people in the harbor have already begun decorating their boats– so that expense will not go wasted, or unappreciated by the public.

Congratulations to the citizens of Newport Beach for once again showing the spirit of independence, and keeping Christmas on our harbor!

We will keep you updated as the events move forward and organization takes hold.   If you would like to stay updated on this and other harbor related events, simply sign up for emails, here: https://savenewport.com/newport-harbor-parade-mailing-list/

Mike is the founder and publisher of Save Newport and Chair of Government Relations for the Elks Lodge. He writes, shoots photos, and edits, but much of the time, he's just "the IT guy". He can be reached at: Google+, Facebook, or via email, at michael.glenn@devion.com
@Save_Newport
Previous Magician Gives Free Show to Honor Restaurant Industry Workers
Next Rocket Launch Scheduled for Saturday Morning