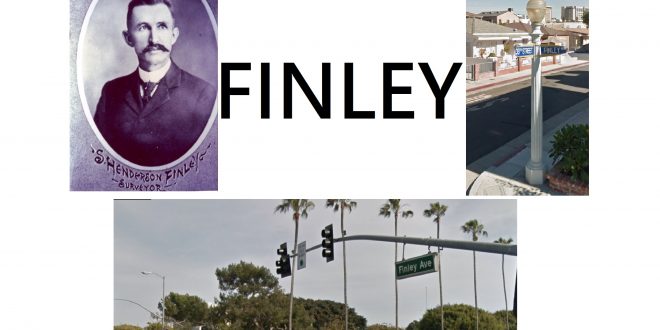 This weekend I took a trek to Newport Island and noticed that a main street there was called Finley Ave, which immediately made me remember the Finley Tract that was recently flooded by a Seawall damaged by a construction company.   Who was this Finley guy, and why is his name all over the place?  Was he a Newport founder?  A local booze smuggler during the Prohibition?  A councilperson?

As it turns out, our “Finley roads” are related to a Col. Solomon Henderson Finley (who went by “S.H.”, according to his grandson who I spoke with on the phone).  SH was a former Santa Ana mayor, former Board of Education member, former OC Supervisor, former secretary of the Metropolitan Water District, and many, many more.  As chief engineer for Orange County highway committee, he created our areas original paved road system in 1915 and 1916.  I’m cutting his accomplishments short, but more can be found here: http://freepages.genealogy.rootsweb.ancestry.com/~npmelton/orbfin.htm

Finley was born in Lincoln County, Missouri, and moved out to Northern California at the age of 7 with his parents.  8 years later, in 1878, his family planted their roots in Orange County.  He went on to have tremendous impact in Southern California building massive engineering projects, and in 1893 he hooked up with the famous McFadden Brothers.  With them, he designed and built the original railroad which went all the way from Balboa Pavilion to downtown Los Angeles, called the Redline, and the Newport Beach Pier.  Steel Finley (S.H.’s Brother) one of 12 children, and believe it or not, it was actually Steel Finley was who the road was named after.

S.H. Finley later passed in 1944, and left two children behind in Orange County, Wendell and Rhodes, with three others Knox, Malcolm, and daughter Gayleene in other areas.  Wendell and Rhodes have passed on, in 2003 and 2005, and share a resting place with their father S.H. at Fairhaven Memorial Park in Santa Ana.  Rhodes left behind a family, with three sons: Jock, Kirk, and Mark, as well as six grandchildren.  Kirk Finley and Mark Finley are with us, with Kirk residing in Villa Park at the age of 71, and Mark in Santa Ana, four years his junior.  Jock is living in Arizona.

Needless to say, the Finley family did a lot for our area.  So next time you see that name on one of our roads– remember that one person really can make a difference.  And be thankful that those roads are paved!

But wait, there’s more!  When building this article, I noticed that Newport Island has the same road names on each side of the channel!  Was this originally not an island?  If not, what changed, when, and why? Map attached: Mike is the founder and publisher of Save Newport and Chair of Government Relations for the Elks Lodge. He writes, shoots photos, and edits, but much of the time, he's just "the IT guy". He can be reached at: Google+, Facebook, or via email, at michael.glenn@devion.com
@Save_Newport
Previous Local Food News
Next Dixon Taunts About “Trolley Success”, Instantly Regrets It