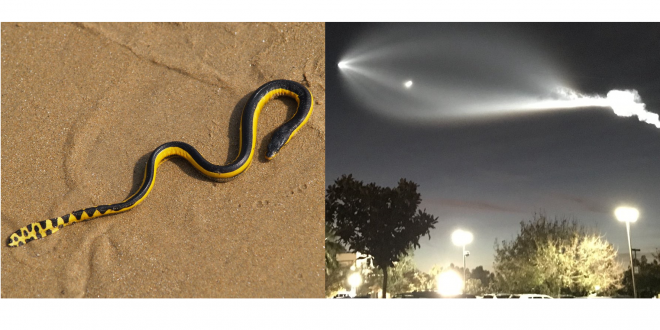 Remember two years ago when the El Nino event brought Yellow Bellied Sea Snakes to our shoreline after a 30-year absence?  Well the venomous sea serpents are back, and they’re on our beaches yet again!  Two were found prior to 1973, two more two years ago, and this marks the fifth time these creatures have been spotted on the shores of Southern California.  This one was located near 18th Street and the beach.  While these creatures pack a serious punch with their venomous bite, there have been no known human deaths caused by yellow bellied sea snakes– but that doesn’t mean you should try to be first!  Use extreme caution if you see one of these either on the beach or in the ocean.

Also happening today and scheduled for 1:55pm is the third launch day for the Delta 4 rocket carrying a spy satellite into orbit out of Vandenberg Airforce Base at 1pm.  The launch window is from 1pm-5pm but they usually try for the earliest times, just in case there are delays.  You can watch the base launch (or delays!), here: https://www.space.com/17933-nasa-television-webcasts-live-space-tv.html?utm_source=notification and then run outside to see it launching into orbit with its tell-tale smoketrail.  If it launches after sunset, we will be treated to the illuminated glow of the famous SpaceX launch that happened just last month, pictured above! 🙂

Mike is the founder and publisher of Save Newport and Chair of Government Relations for the Elks Lodge. He writes, shoots photos, and edits, but much of the time, he's just "the IT guy". He can be reached at: Google+, Facebook, or via email, at michael.glenn@devion.com
@Save_Newport
Previous HoSum Bistro is BACK, starting Monday!
Next DA Seizes Peotter Recall Petitions for Fraud