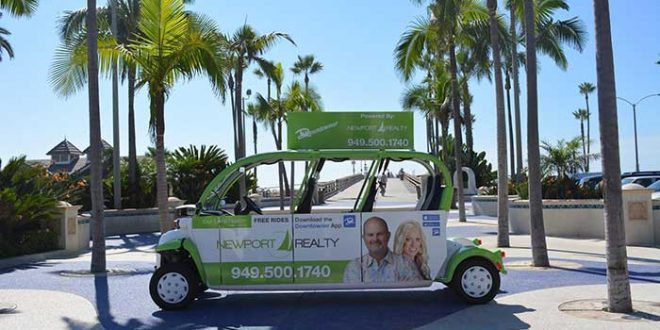 The quirky but super-functional and omni-present free transportation system that has been on the Balboa Peninsula for years is officially being shut down in Newport Beach.  The last day of ridership will be on Halloween, Tuesday, October 31st, 2017– their two year anniversary.

With a strong start as a passion project operating on thin margins by two local peninsula residents, the Downtowner grew from just a few lonely golf carts to serving 86,844 passengers with 35,458 (numbers as of yesterday) rides in just two years– a massive accomplishment.  The business model was simple: Put ads on the carts to generate revenue to offer free rides to locals. Essentially a mobile-billboard service that offered community benefits.

As the business continued, they wanted to expand their operations to Balboa Island and Corona del Mar, but the city denied them the ability to do that.  Furthermore, the city decided to start its own bus service which caused advertisers to hold back on renewing contracts as the business seemed “less official” than an official city-logo-bearing City of Newport Beach Shuttle Bus.

Owner and local Jake Allsop says in his own words the reason for the shutdown was: “The city of Newport Beach launched its summer shuttle service to directly compete against the Downtowner. This hurt our ridership and also advertising sponsors renewing their contracts.”

and “The city of Newport Beach has made it near impossible for the Downtowner to expand the service area to serve more of the Newport Beach community.”

But District 1 Councilwoman Diane Dixon (who championed the bus plan) was joined by Jeff Herdman, Brad Avery, Duffy Duffield, and a shocker of Will O’Neill in passing the extremely unpopular bus idea, which ultimately led to the destruction of the Downtowner.

I warned about this exact scenario in the highly controversial councilmeeting where Dixon repeatedly fabricated the notion that I “owed the city lots of money” in order to overshadow my testimony and my warnings of exactly this occurring: https://www.youtube.com/watch?v=R3RkM1VmYJ8 (more on that, here: http://savenewport.com/2017/08/17/diane-dixon-gets-sued/)

But don’t delete the app just yet– Newport is not their only location, and they are thriving in more business-friendly cities including Manhattan Beach in California, Aspen, CO, and the Florida locations of Boca Raton, Tampa, and Delray Beach.

Newport locals will always have fond memories of the Downtowner– so hop on one last time and be sure to tip accordingly as we enter the last 5 days of this wonderfully quirky service that reminds us all the damage that government can do when they begin competing with the free market.

It was a good ride, Downtowner.  I wish we could have done more to save you from the always-overreaching tentacles of government competition in what was already being serviced– at cost to taxpayers– by the free market.

Mike is the founder and publisher of Save Newport and Chair of Government Relations for the Elks Lodge. He writes, shoots photos, and edits, but much of the time, he's just "the IT guy". He can be reached at: Google+, Facebook, or via email, at michael.glenn@devion.com
@Save_Newport
Previous Blackies 11th Annual Halloween Surf Competition
Next DUI Saturation Patrols this Weekend through Halloween