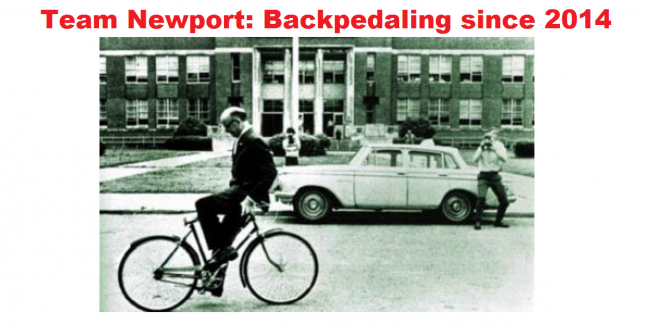 In 2015, Keith Curry came up with an idea to stop the taxation increases that kept being pushed forward by Team Newport (or, as I like to call them, Team New-to-Newport), which includes things like the 15% increase that was implemented in our parking meter rates at their behest almost immediately after they took office, or the Dock Tax implemented under their power despite their campaign saying they would stop it.

The resolution would be to add to the ballot a requirement to obtain 5 of 7 supermajority to pass new taxes or increase existing taxes– something that would have limited Team Newport’s ability to do either.  (Right now, only a simple majority is required.)  The council voted, a resolution was made, and the city notified the Registrar of Voters about a new ballot initiative that would be coming in this year’s election cycle.  Now, Team Newport is back-pedaling.  The item is coming up for a re-vote, which isn’t good (if the item didn’t come up at all, it would be on the ballot).

So why is this coming up for a re-vote? Well, there are only two possible real reasons:
1) Team Newport either realizes that Curry had a good idea and they want to prevent him from getting credit for it by slightly modifying it and claiming it as their own.
or
2) Team Newport wants to stop this from getting on the ballot so that they can continue to raise our taxes.

#1 is a deceitful stunt to the voters which many have become used to after Team Newport affirmed the Dock Tax after running heavily on a platform to fight it.
#2 is simply awful, showing that Team Newport is ready to expand taxes even more than they already have.

So which one will it be?  At this point, we can only hope that it is #1.
Write council and demand that they keep their word from their previous votes about taxes needing to be approved by a 5/7ths supermajority and to put it on the ballot THIS YEAR.  They can be reached at citycouncil@newportbeachca.gov

Mike is the founder and publisher of Save Newport and Chair of Government Relations for the Elks Lodge. He writes, shoots photos, and edits, but much of the time, he's just "the IT guy". He can be reached at: Google+, Facebook, or via email, at michael.glenn@devion.com
@Save_Newport
Previous Pet of the Week: Halo
Next Mariner’s Mile Talks See Heavy Citizen Pushback