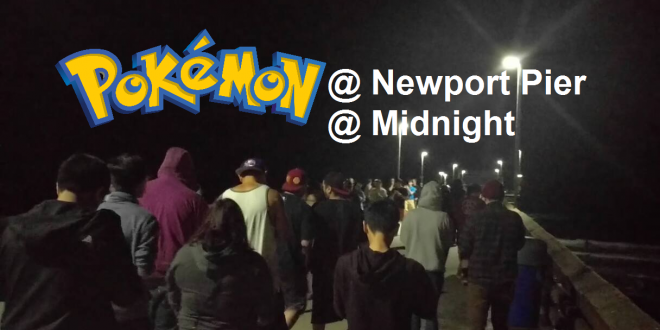 Some may say the zombie apocalypse is upon us, and frankly I can’t believe I’m writing about a Pokemon game, but apparently this is the game that is shaping the nation right now, whether we want to believe it or not.

Monday night, I got word that there were many thousands of people packed into the Newport Pier area as late as 3am, wandering around and staring at their phones, so I went out last night at about midnight to see just how packed it was.

Between 1,000 and 2,000 people squeezed in on the pier and in McFadden Square, stretching the entire length and both sides of the Mutt Lynch’s parking lot. I stopped to talk to some of the people about it, and all of them were friendly and enthusiastic about explaining how the game works and what it means to them. Most agreed that it was the exciting to them because it was an actualization of a childhood story. The players were mostly under 35 years old, but there were a few significantly outside of that demographic. Ever seen a 70 year old man roaming the streets at midnight while playing Pokemon with the most ridiculous smile on his face? You should.

I tried to document this through photographs, but it’s frankly difficult to photograph thousands of people in the dark salty air and make it come out okay, so forgive the grainy cover photo that doesn’t show the magnitude here. (If you have a drone with a great camera, this would be a perfect late-night capture.)

With all the chaos going on in politics, wars, and with so many problems in our world, it was nice to see everyone come together again around a common– albeit ridiculous– goal. People were telling others where to find the objects they sought out, and everyone was being friendly and talking with strangers and spreading kindness. But be careful if you go to sight-see out there– the hordes may convince you to install the app and join in on the hunt. And if you do install it, be prepared to walk. A lot. And in the meantime, take a look at this hilarious twitter search result set for “sore legs pokemon”:

Over all, it was really a bit inspiring seeing people going outside, seeing their city, and talking to one another like human beings. Perhaps we can use this as a springboard to eventually do the same thing– without an app.

Mike is the founder and publisher of Save Newport and Chair of Government Relations for the Elks Lodge. He writes, shoots photos, and edits, but much of the time, he's just "the IT guy". He can be reached at: Google+, Facebook, or via email, at michael.glenn@devion.com
@Save_Newport
Previous Ben Carlson Statue: Full Video + Plaque Pictures
Next Throwback: Tarzan Rented Paddleboards in Newport?