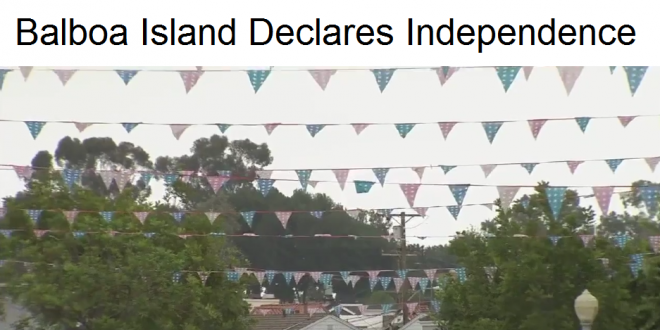 This week, city officials sent letters to Balboa Island residents demanding that they remove over-the-street decorations from their homes and businesses.  The demand letter was triggered by a complaint from an unknown resident.  Balboa Island residents responded in the same independent spirit that has set Newport away from others since the start… they said they were simply going to do what they wanted to.

City Manager Dave Kiff played it politically perfectly, stating that while the city does have a law and the decorations do need to be taken down in a “timely manner”– that “timely manner” can and should be after the 4th of July– so don’t expect anyone to be hauled off in chains and wagons for this municipal offense just yet.
—-

In another move of independence, the Mediterranean restaurant Aurora on has officially changed ownership.  As the old owner Kayte declared her independence from it, the new owner Joe is building his independence with it.  Doors officially re-opened yesterday, but swing by this weekend for a celebratory wine, or skip the crowds and come in next week for the food.  It’s a hidden gem at 2307 W Balboa Blvd on Balboa Peninsula!
—-

For today’s trivia: Did you know that the day we actually declared independence from Britain was… today?  That’s right, on July 2nd, 1776, the Continental Congress voted to approve a resolution for independence from the UK, publishing “This day the Continental Congress declared the United Colonies Free and Independent States.”– big words!  So what’s with July 4th?  That’s the day that the Continental Congress officially adopted the Declaration of Independence, but they waited until my birthday on July 8th to have their official celebration (NOTE: Some historians argue that they didn’t wait until July 8th because they knew when I was going to be born, but instead simply it just took about a week to arrange for parades and other such things.  Clearly they are wrong.)

So take some time off and reflect on what a nerve-racking decision it must have been to sign that document in face of the full force of England being upset with those very specific 56 delegates.  That took courage.  And most of them lost all of their very significant wealth by doing so.  That courage is immensely appreciated.

Mike is the founder and publisher of Save Newport and Chair of Government Relations for the Elks Lodge. He writes, shoots photos, and edits, but much of the time, he's just "the IT guy". He can be reached at: Google+, Facebook, or via email, at michael.glenn@devion.com
@Save_Newport
Previous Pet of the Week: Ricky
Next Big Grunion Run (& Shore Fishing) This Week (Peaks Today & Tomorrow)