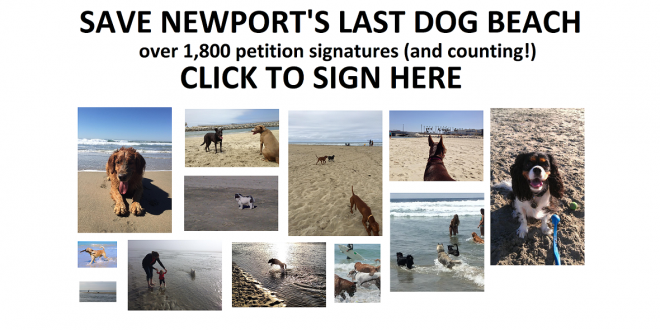 It is with great excitement that I can report we have received over 1,800 signatures from people who want to save Newport’s Dog Beach from being turned into “just another beach” .

At last count, over half of the signatures were from Newport Beach, but many hundreds more are from our neighboring cities who use the public state beaches that our city adjoins to (HB, CM, Irvine, Laguna).

A few months ago, Diane Dixon proposed getting rid of our beautiful and very active Dog Beach by using Newport Police to patrol county-owned land and enforcing a leash-law there. As you can see by this map, the less-than-200-yard stretch of land is outside of the jurisdiction of Newport Beach (click photo to enlarge).  In total, Newport Beach has over 40 miles of coastline– the largest amount for any city in Orange County, and perhaps in all of Southern California.

So the question is: Can Dixon order Newport tax dollars to be spent to enforce laws in areas outside of Newport Beach?  The answer is a little complex, but essentially, the answer is “yes”– as long as the county agrees.  Through a legal device known as a Memorandum of Understanding (like the MOU between HB and the county, here), Newport Police can essentially act as the enforcing agency for county law.  If we decide to do this, we itemize the time that our police are no longer keeping Newport safe, and instead patrol and bill the county for all the time that our highly trained police department is stuck having to enforce leash laws on land that isn’t even in Newport Beach.  Stupid, to say the least– and almost as insulting to our police as putting them on “skateboard duty” to ticket skateboarders on the boardwalk, or asking them to ticket grown adults for not wearing bicycle helmets.  Our police deserve better treatment than this.

We are making great progress with the signatures so far, but a source close to the matter has informed me that it’s still a coin toss with Dixon, despite literally less than a dozen people having voiced opposition to keeping Dog Beach.  For that reason, I am hoping to get as many signatures as possible on the petition so that we can make our voices heard on the subject.

I wrote Dixon on the matter and asked her whether or not we could stop the process before it got embarrassing for everyone.  She replied back that things would be decided in Study Session (in otherwords: “No”).

Newport’s Study Sessions happen in the middle of the work day, preventing normal people from attending.  If you would like to have your voice heard, please sign the petition here and share it with your friends.  I will be attending the study session and will personally hand over the signatures to the city to ensure that your voice is heard.

Some will argue that “Dog Beach” is a made-up name, even though virtually everyone refers to it as that.  I say: “tell Google that.” Mike is the founder and publisher of Save Newport and Chair of Government Relations for the Elks Lodge. He writes, shoots photos, and edits, but much of the time, he's just "the IT guy". He can be reached at: Google+, Facebook, or via email, at michael.glenn@devion.com
@Save_Newport
Previous Who’s Open on Christmas? These Guys!
Next Don’t Drive Drunk on NYE (FREE RIDES)