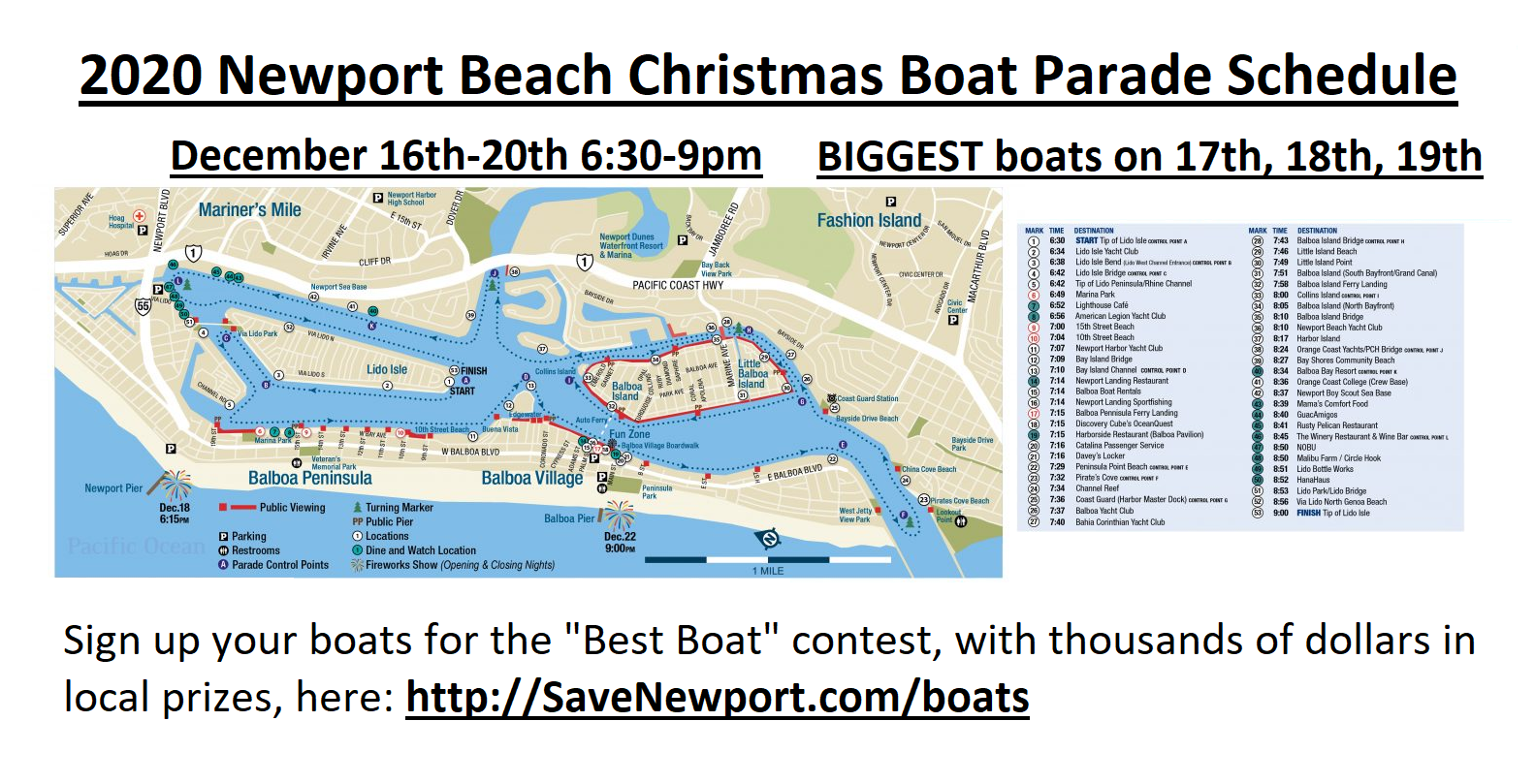 As everyone is quickly becoming aware, the Newport Beach Christmas Boat Parade is most definitely *not* cancelled.  The Newport Beach Chamber of Commerce has decided to cancel *their marketing* of the event which drives business to their own members– our merchants who are already struggling this year.

But the Parade will go on!

This year, several groups are organizing– from our unofficial count for this unofficial parade, all but one group is going to be participating in all five days from Dec 16 to Dec 20, with what appears to be a very large group (almost certainly the largest) organizing their group for just the middle three days.  Starting at the tip of Lido Isle, this new tradition without the Chamber has a new tradition of its own, and will kick-off by sailing through two “Starter Markers” (Newport’s own Cruisin’ Tiki Boats)– probably the most easily-identifiable boats in the harbor from a distance, which will hopefully cut down on some of the confusion.

The event is sure to be beautiful on any day people decide to see it.

Point of clarification: In a very un-Christmaslike fashion, several reports from the harbor indicate that a few individuals from one particular group have been issuing statements to boaters and viewers alike which have confused nearly everyone– and seem designed consolidate power to themselves– and are actually telling people that celebrating with by captaining a boat in the boat parade can only happen inside the three days that one particular (large) group has planned.  This is flatly untrue.  This misinformation on the harbor has likely quelled much of the Wednesday display, sadly.  It is our hope that this group changes gears and welcomes everyone to Newport Beach’s Christmas Boat Parade, with the spirit of community and sharing in mind.
To be clear: all noncommercial boat parades are legal and can be put on by anyone, at any time. Nobody holds ownership over the “Newport Beach Christmas Boat Parade” name, title, or organization. So while the biggest boats are more than free to operate from Thursday to Saturday, if you wish to participate in the full stretch of the event– don’t let anyone scare you off by giving you any “Executive Orders”– This is your harbor too, and you are free to use it on any day you wish.
For the rest of the people enjoying the spirit of Christmas and sharing– we look forward to seeing the Boat Parade ramp-up from the Wednesday display, into the three big days from Thursday, Friday, and Saturday, and very likely a trailing display on Sunday, as normal.  A big five days will show the city that Newport Beach doesn’t need the Chamber of Commerce to promote our events– especially if they bail on their own merchants at the time when they are needed most.  A half-showing will make the opposite argument.
But now let’s get to some fun stuff: VOTING ON YOUR FAVORITES!

This year, any boat can enter into the voting contest by simply signing up and getting a number, here: https://savenewport.com/boats/ — The numbers may push into the three digits this year– but it will be worth it!  Additionally, this year will be the first ever voting *available to the public*!  That’s right: No more Chamber-Controlled voting.  This one comes straight from the people 🙂

Check back to that very same URL to vote for your favorite boats this week!

Viewers of the boat parade have four options to vote on, with one vote per category only.  The winners of each category will be going home with prize packages exceeding $1,000 each from our local businesses who have stepped up to show support.  To be fair to the “Big Group”, voting will happen on Thursday, Friday, and Saturday.  Winners will be determined on Saturday night, and prizes distributed next week, depending on the in-person availability of the winners.
So let’s hear about the prizes!
These local business have put their dollars on the line to ensure a good Newport Beach Christmas Boat Parade, so please show them some support and patronize their businesses!  The prizes will be divvied up between four categories (BEST POWERBOAT, BEST SAILBOAT, BEST BOAT UNDER 30ft, SPECIAL EFFECTS) in roughly equal monetary value.  So far, local supporting businesses include: Providing $20 gift cards for ALL Categories! Private Magic Show on your Yacht, House, Airplane, or local venue of your choice $50 Gift Card for the Country Club If you would like to donate to the prize packages, simply email mike@savenewport.com

Mike is the founder and publisher of Save Newport and Chair of Government Relations for the Elks Lodge. He writes, shoots photos, and edits, but much of the time, he's just "the IT guy". He can be reached at: Google+, Facebook, or via email, at michael.glenn@devion.com
@Save_Newport
Previous Brad Avery in as New Mayor, O’Neill Out; Muldoon appointed as Mayor Pro Tem
Next The “Christmas Star” Shines TONGHT!