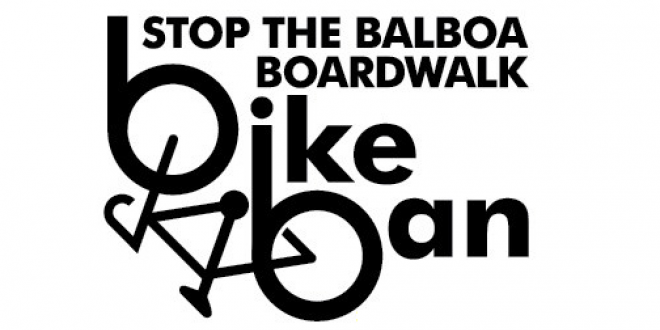 As we warned Tuesday, the proposed “Electric Bike Ban” was only one step in the full plan to ban all bicycles from the boardwalk.

Many people could simply not bring themselves to believe that any politician would ever propose such an item.

However, last Tuesday evening, in the council chambers, Councilwoman Diane Dixon (who is running for Assembly) made a motion to ban *all vehicles* from the boardwalk, and make it pedestrian-only during the summertime (from Memorial Day to Labor Day weekends).  She was joined in this motion by Councilmen Brad Avery and Jeff Herdman–both running for re-election– as well as Councilwoman Joy Brenner.

Yes, that’s right.  Because some people were speeding, and because the council refuses to prioritize enforcement for speeding on the boardwalk, now they are considering banning all bikes from the boardwalk, which would end generations of fun and tradition on Balboa Peninsula.

Worse than that, we already saw the disaster that was created when the council attempted to enforce the rule against Surrey’s using the boardwalk.  The four-wheeled rolling roadblocks began using the main street instead, causing traffic backups for blocks– and in some cases– miles.  Forcing all bicycles, skateboards, scooters, and Segways to follow Surreys onto the main drag of Balboa Blvd will put residents at more risk as frustrated drivers become increasingly more aggressive in their attempts to pass them– and their contempt for the riders themselves.

We’ve already seen this movie.  We cannot ban vehicles from the boardwalk without having a place to put them.

If you wish to be heard on this item, council will be voting on it in their next session.  You can also email them at citycouncil@newportbeachca.gov to voice your opinion.  There are heavy lobbying efforts from boardwalk property owners which have been ongoing for years.  They– of course– want a more “private beach” and have made significant campaign contributions to politicians who are backing this idea.  Your emails and your voice is critical to stopping this effort to limit access to an amenity that Newport Beach is famous for.

Mike is the founder and publisher of Save Newport and Chair of Government Relations for the Elks Lodge. He writes, shoots photos, and edits, but much of the time, he's just "the IT guy". He can be reached at: Google+, Facebook, or via email, at michael.glenn@devion.com
@Save_Newport
Previous Council Considering Banning Electric Vehicles on Boardwalk
Next What’s All The Hubub on the Harbor? It’s the WoW Parade HAPPENING NOW