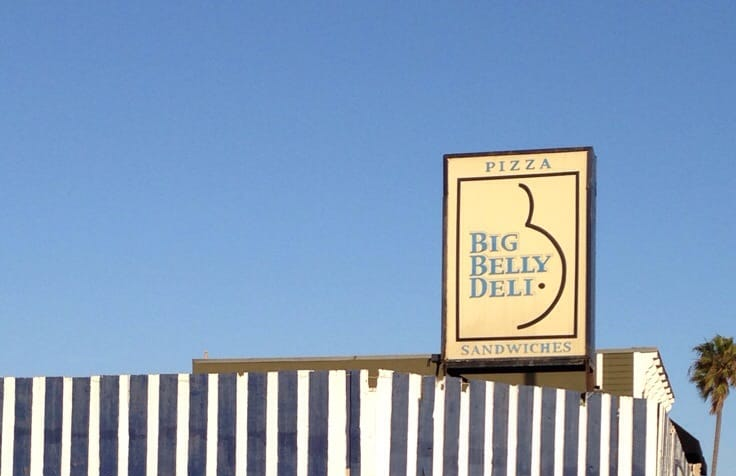 The beloved deli, which had gone through a tumultuous splitting of partners a few years back, previously had a name change “6310”, a reference to its address at 6310 West Coast Hwy, Newport Beach, CA 92663.  After apparently reconciling with the partners, the name was restored to Big Belly Deli, to much fanfare.

So what caused the closure? I have been unable to contact the owner directly to hear if this was caused by a lease increase, a partnership split, or something else… but after talking with the neighboring businesses, it sounds like we lost yet another favorite spot for the locals due to wintertime traffic decreases.  I am unsure when Big Belly Deli originally opened, but this author has been going there for at least 12 years.

Please: If you love a place, give them your business– especially in the slow season!

What we have now is memories of our sticker-adorned sandwich and pizza shop, and I look forward to seeing the next place that steps in to fill these giant shoes.  Big Belly Deli, you will be missed! Mike is the founder and publisher of Save Newport and Chair of Government Relations for the Elks Lodge. He writes, shoots photos, and edits, but much of the time, he's just "the IT guy". He can be reached at: Google+, Facebook, or via email, at michael.glenn@devion.com
@Save_Newport
Previous How Much Money Does it Take to Buy a Newport Beach Election?
Next DUI Saturation Patrols on St Patricks Day AND Newport’s Irish Establishments!