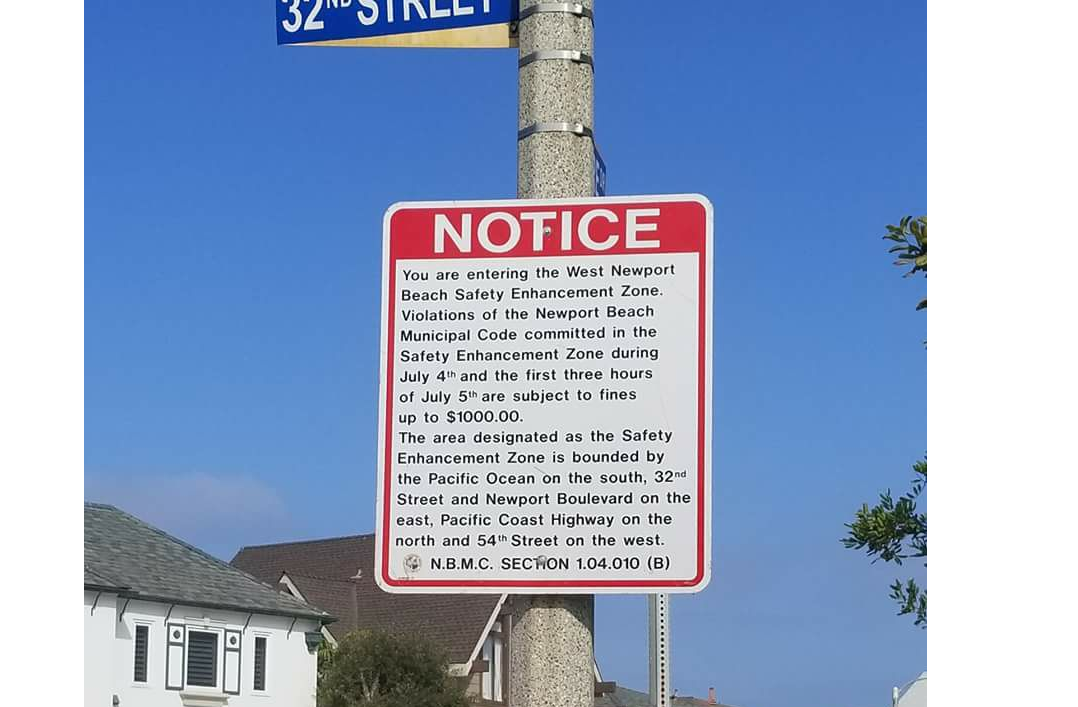 Whether you like rowdy 4th of July Parties or you hate them, creating zones of disproportionate fines within the same city is a violation of the 14th Amendment’s Equal Protection Clause, and therefore unconstitutional. If a $1,000 or a $3,000 fine is better to have for a rowdy house party, then that fine good or bad for the entire city, not just select areas. If a rowdy house party on Balboa Peninsula should be fined $3,000, then that rowdy house party in on Cliff Drive or in Big Canyon should be treated equally.

Newport Beach is once again deciding to enforce discriminatory zoning practices for the 4th of July, which the Newport Beach City Council calls a “Safety Enhancement Zone”. Yesterday, the signs (pictured) went up. These practices are proclaimed to “target problem areas” with penalties which are more severe than if you did the same thing in any other area of town– by a multiple of three. These discriminatory zoning practices– put into place on the very day we celebrate our independence from a oppressive, discriminatory government– are in direct violation of the Equal Protection Clause of the 14th Amendment; i.e.: If you want to make this rule for this section of town, it must also apply to all other sections of town.

Fines within the Safety Enhancement Zone are triple the normal amount and can be as much as $3,000.

The Safety Enhancement Zone is bounded by the Pacific Ocean on the south, 32nd Street and Newport Blvd on the East, PCH on the North, and 54th Street on the West.

Do you think that the rest of the city should be subject to different punishment than the historic 4th of July zones at the top of Balboa Peninsula, or do you think this illegal act should be abolished?

Let your councilpeople know, by writing them at citycouncil@newportbeachca.gov

I reached out to Councilwoman Diane Dixon, who oversees District 1 (Balboa Peninsula), as well as the City Attorney, but both refused to comment on this blatant Constitutional violation.

Mike is the founder and publisher of Save Newport and Chair of Government Relations for the Elks Lodge. He writes, shoots photos, and edits, but much of the time, he's just "the IT guy". He can be reached at: Google+, Facebook, or via email, at michael.glenn@devion.com
@Save_Newport
Previous Happy Father’s Day Today!!
Next Here They Go Again! “The Really Big Show” Debuts Saturday at Noon!