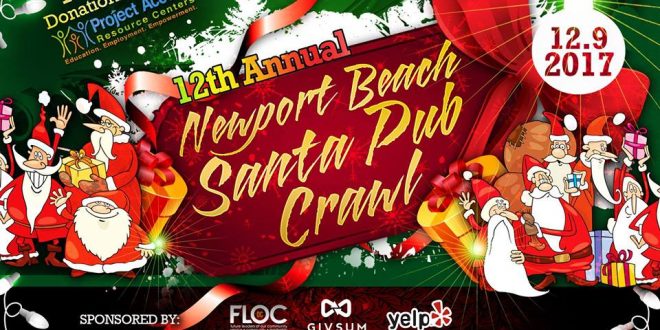 Have you ever seen a mass of HUNDREDS of Santa’s drinking beer?  Well on tomorrow on Saturday December 9th, you can!  Santa Crawl is open to everyone over 21 years old– and if you can come in a Mr or Mrs Santa Suit, you’ll fit right in!  Other holiday costumes are also more than welcome, of course!  If you don’t already have a Santa Suit, they can be purchased at places like Walgreens for less than $20– or you can go all-out at a costume shop for the crazy plush suits and spend as much as you’d like!

The event is huge, hilarious, and humanitarian, with 100% of funds raised through the wrist-bands going towards Project Access, which helps the less fortunate during the holiday season.

Mike is the founder and publisher of Save Newport and Chair of Government Relations for the Elks Lodge. He writes, shoots photos, and edits, but much of the time, he's just "the IT guy". He can be reached at: Google+, Facebook, or via email, at michael.glenn@devion.com
@Save_Newport
Previous Throwback: Queen Mary’s Final Voyage
Next Geminid’s Meteor Shower Peaks — Best Show of the Year!