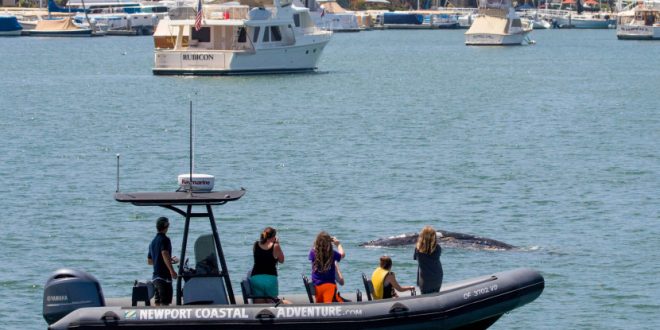 A gray whale was spotted inside of the Newport Harbor on Thursday, two days after it was seen in Dana Point Harbor.

Thursday at 12:50pm, Newporter Todd Hill served up a tip that he spotted a whale inside the channel after passing under the Balboa Blvd bridge. “Really?” I said. Jokingly, he swore he hadn’t been drinking. A whale it was! A baby gray whale measuring in at just over 20 feet (an adult generally measures about 50 feet).

I posted online to see if anyone had a drone to catch some shots of it, and while we did get one gracious volunteer (thanks Forrest!), the whale decided that he was going to relive his days of Hide and Seek champion. This game, possibly, is how he lost his pod, as he’s been coming up the coastline solo from Carlsbad to Dana Points Harbor, to swimming with people at Laguna, and yesterday tucked deep inside of Newport.

The whale is behind schedule for the summer migration to Alaska where they feed on plankton from Baja where they enjoy inexpensive umbrella drinks by the ocean (this is also longest migration pattern for any mammal), and this little guy was probably left behind by his pod after wandering off or becoming injured along the way– although the whale is smaller in size, it does not appear to be too skinny or injured at this point, according to Taylor Thorne, captain with Newport Coastal Adventure.

Sailboat Captain David Quesada agreed, and further opined: “It probably doesn’t want to cross the trench in Monterey or be in deep water. It’s safe against predators in shallow water.”, referring to the naturally occurring deep off-shore trench which is home to much sealife.

But is there anything we can do? Is he in harms way? Brian Stanley with the Harbor Patrol said “there’s not really much we can do for them, we just have to wait for them to get bored and leave. He’s probably just exploring.”

This statement was backed up by Alisa Schulman-Janiger, with the American Cetacean Society, noting that the behavior of “harbor hopping” is frequent, and since the whale was previously inside Dana Point, he may not just be exploring– he may simply be having “fun”.

But that wasn’t fun for everyone! Captain Quesada noted that for the first time in history, BYC’s traditional Thursday “Beer Can Race” was cancelled out of concern for the whale.

If you do see a whale in the harbor or in the Worlds Largest Fish Tank, it is best to keep your distance. These gentle giants can accidentally capsize boats or cause extreme damage just by bumping into them. And while this little guy has got a long way to go back to Alaska, we’ll be rooting for him– from the shoreline, or from next weeks Beer Can races!

Mike is the founder and publisher of Save Newport and Chair of Government Relations for the Elks Lodge. He writes, shoots photos, and edits, but much of the time, he's just "the IT guy". He can be reached at: Google+, Facebook, or via email, at michael.glenn@devion.com
@Save_Newport
Previous Throwback: The Bay Arcade
Next Barbara Venezia Grills Council on Dave Granoff Inaction