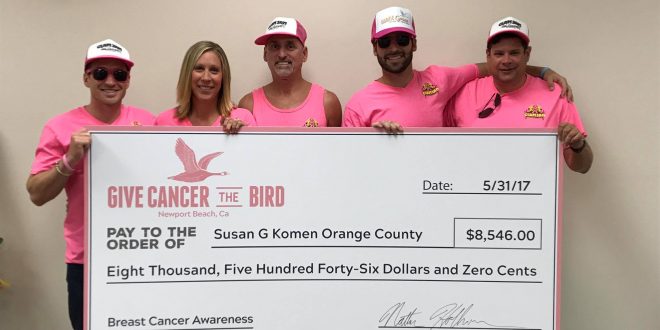 The 3rd annual 7th St Party just keeps getting better and better!  This year the party (better known as the 3rd Annual Clam Jam) raised over $8,500 for the Susan G. Komen Foundation.

Thrown on the Saturday of Memorial Day Weekend, the party saw hundreds of attendees as the entire block of 7th and Oceanfront was shut down to traffic.  The organizers, primarily hosts Nathan Holthouser, Mandy Garner Laux, Pete Laux, and other co-organizers, Matthew Gregory, Steve Baugh, James Lehigh, and a few others who chose to remain anonymous all came together to throw a great block party.  Permits for the city were pulled, bouncers were hired, the TK Burger Truck came by, anti-cancer “swag” was everywhere to be seen, and the community event lasted for 7 hours before timing out– and nothing could have gone more perfectly.

Beers and burgers flooded the area, cash was being stuffed into the tip (aka donation) jars, cornhole was being played in the road (blocked to traffic, as all parking was already taken), and all of the neighbors on the block joined in the fun.

But while the draw may have been the fun and camaraderie, the real goal was to raise money for a good cause, and that goal was met with flying colors!  In the end, the event raised $8,546 for the “Give Cancer The Bird” charity, who donated it directly to Susan G. Komen Orange County.

You ready for next year?  Check out the pictures and video of the one on Memorial Day weekend, and sign up to be notified next year, below! Mike is the founder and publisher of Save Newport and Chair of Government Relations for the Elks Lodge. He writes, shoots photos, and edits, but much of the time, he's just "the IT guy". He can be reached at: Google+, Facebook, or via email, at michael.glenn@devion.com
@Save_Newport
Previous New Wedge Tree to be Planted
Next 28ft Boat Gets Stranded on Shore: The REAL Story