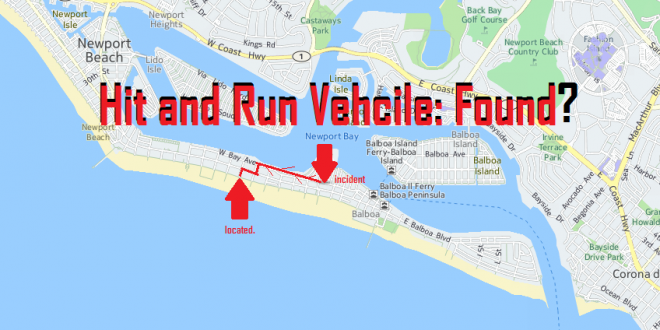 UPDATE @3:35pm: Local Newport resident, Sara Lunsford, who reported the car, had heard about the incident from the news in the morning.  When she went for a run she noticed a car with minor front-end damage on the drivers side and a windshield which she said looked like “honestly, a body had hit it. It was pushed in and shattered on the driver’s side” (as pictured below).  The car was a light tan rather than the white/silver which was being reported, and the airbags did not appear to be deployed, but this was clearly a car which had hit something– and nobody could drive very far with that kind of windshield damage in front of the driver.

THANK YOU Sara, for your eyes and ears!  And a big thank you to our police department who continue to work this case to its end.

As we reported last night, there was a Hit & Run on Balboa Peninsula leaving a 14 year old girl injured, now in the hospital with a fractured skull.

Police searched last night for hours by car and helicopter, with the chopper eventually going home at 11:25pm and the CSI leaving in the early hours of the morning.  Word went out to all the auto-repair shops headed by Henry Romero of Costa Mesa Collision and Auto Painting to keep an eye out for a car whose airbags were deployed with possible front-end damage.

Right now, it appears that the police have located the vehicle on 11th Street on Balboa Peninsula thanks to a tip from an eagle-eyed local.

Updates will be given as new information comes in. Mike is the founder and publisher of Save Newport and Chair of Government Relations for the Elks Lodge. He writes, shoots photos, and edits, but much of the time, he's just "the IT guy". He can be reached at: Google+, Facebook, or via email, at michael.glenn@devion.com
@Save_Newport
Previous Council Votes Against Free Speech– WTF?
Next Peninsula Hit And Run: Driver Turns Himself In