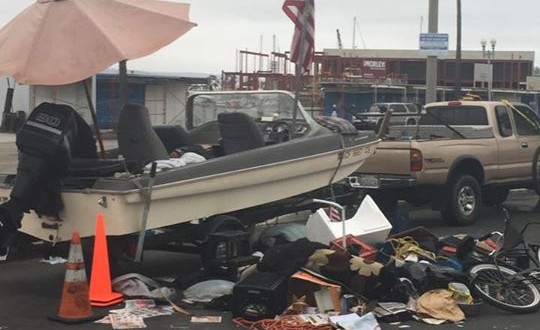 For months, a homeless man who calls himself “Sarge” has been terrorizing Newport residents and visitors alike.  He yells at passerbys and instigates fights.  He uses his dog (now taken from him) to scare everyone by keeping it on a 10-foot leash.  He has camped out in the parking lot between Woody’s and Cassidy’s for nearly a month, and his truck (and boat) are littered with parking tickets.  In a bit of a comical stance, he somehow acquired a scissor lift which joined his trash pile for a few days last week, from which he threw garbage at cars and bicyclists.

Newport Beach has a history of being pretty tolerant with a small but polite homeless population, but this has spun completely out of control.

Between visiting and living on the peninsula, one resident who has been here for 15-years says that Sarge “has been one of the worst homeless people I’ve ever experienced in my 15 yrs of coming/being here. He antagonizes residents & guests and terrorizes local businesses. Plus I think he’s a case of stolen valor.”

Newly elected councilwoman Diane Dixon ran on a campaign of maintaining “Quality of Life” but in the seven months she’s been in council she’s done nothing but attack businesses while giving tacit approval to this character turning our beautiful peninsula into his own personal junk yard.

Yesterday, it took SANTA ANA Mounted PD to remove him from the top of the globe at the Newport Pier, and finally arrest him. As residents, we have had enough.  Our quality of life is diminishing by the day and this kind of behavior is impossible to overlook, so Councilwoman Dixon is either ignoring this problem specifically, or completely neglecting her own district.  I don’t care which one it is– the problem has now been officially identified and the solution is clear:
Sarge. Must. Go.

Mike is the founder and publisher of Save Newport and Chair of Government Relations for the Elks Lodge. He writes, shoots photos, and edits, but much of the time, he's just "the IT guy". He can be reached at: Google+, Facebook, or via email, at michael.glenn@devion.com
@Save_Newport
Previous A Day to Remember
Next Lifeguard Ben Carlson’s 1-year Memorial