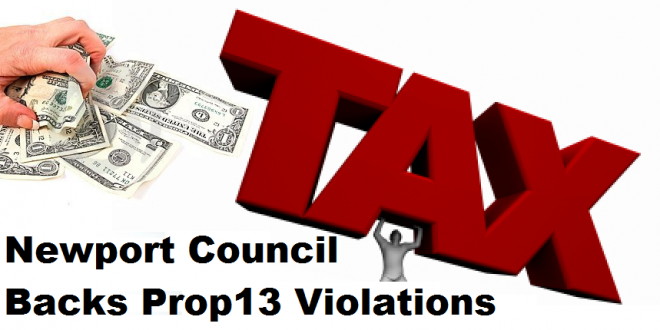 Newport Beach City Council has institutionalized violations of Prop13.  This report will show how Newport is taxing home value without bringing it to a public vote.

1) A TAX NOT A FEE: Newport Beach’s infamous “Dock Tax” is claimed to be a “fee” by City Council.  This is incorrect.  Nobody likes splitting hairs, but if they are going to do it, they should do it accurately: a “tax” is a payment designed to raise general revenue, whereas a “fee” pays for the direct expense of a specific service.
– The initial charges on a dock were a fee: This money was allocated to inspect the dock itself– a service for which the dock was the benefactor– but those have since been repealed and replaced with a tax.
– The new charges on docks are a tax: This money is pushed directly into the general harbor fund for a wide variance of generalized harbor expenses– a harbor which everyone enjoys.
Generalizing collections into a communal fund make it crystal clear: This is a tax, not a fee.

2) TAX ON HOME VALUE: This tax is levied upon home value, according to the appraisals given by the Orange County Tax Assessor.

As you can see in the document above, “DOCK” is listed as one of the items comprising home value.  Let me re-iterate: The entity that defines home value– the county assessor itself– lists “DOCK” as a part of home value.

3) PROP13: Prop13 requires taxes on home value to be brought to a public vote, to protect taxpayers from precisely the type of “tax-and-spend” politicians we have here in Newport.  Newport’s city council has decided to attempt to circumvent Prop13’s tax protections by pretending that the dock tax is a “fee” instead of a “tax”.  This is patently false, as shown above.

The methods in which we execute our governance are as important as the outcome itself.  This is an awful reflection upon Newport Beach and a terrible precedent to set for all California homeowners.  This very-apparently-illegal tax must be repealed– with much fanfare.

Our current council is an embarrassment to the fiscally conservative Newport Beach.  This November, it is time for a change.  Vote out the incumbent Mayor Rush Hill and cast your vote for Duffy Duffield, a local business owner who understands that small government and low taxes are the only way to ensure the maximum amount of both personal liberty and economic freedom.

Mike is the founder and publisher of Save Newport and Chair of Government Relations for the Elks Lodge. He writes, shoots photos, and edits, but much of the time, he's just "the IT guy". He can be reached at: Google+, Facebook, or via email, at michael.glenn@devion.com
@Save_Newport
Previous Throwback: The Newporter
Next Throwback: Ruben E Lee